I feel at home in Pune, roads are as bad as in Bangalore – Azim Premji

On NDTV, a recent poll on worst roads in India revealed Bannerughatta Road in Bangalore as “The” worst road in the country. NDTV also aired a show titled “is the IT dream of Bangalore over?” hosted by Srinivasan Jain. The recent rains in Bangalore exposed all the weaknesses in the infrastructure of Bangalore. IT.in got washed away because of the rains. The city was crippled in just two day because of nominal rain. I will not be surprised if, in about 3 years, IT industries move out of Bangalore over this issue.

It is disturbing to see the lack of commitment in our politicians. When it comes to development it is them who prove to be the major road block. We have Hong Kong, who in order it sustain economic growth, constructed a whole new island for an Airport. And we have politicians of Karnataka, who despite having all the resources have half-heartedly given an ‘OK’ for the new Airport in Bangalore. I don’t understand what the fuss is all about. Repeated delay, corruption etc. etc. made a perfect recipe for the decline in the infrastructural facilities in Bangalore. In just over a year of formation of the new government, the roads in Bangalore have gone from good to bad to, now, worst.

IT industries contribute to 25% of the state’s GDP, provides employment to about 3 lakh people directly and many many more indirectly. All that the government had to do was give them good facilities, which BTW is the duty of the government. The the NDTV’s show, Former PM Deve Gowda absolutely had nothing to defend against any of the questions asked by the people present. What he said made absolutely no sense to the context of the discussion. I don’t seem to understand the ‘funda’ of improving the villages. Where will the money come from? The answer is, of course, from IT industries. When we know we have a potential advantage with IT sector booming in Bangalore, why do we neglect them. 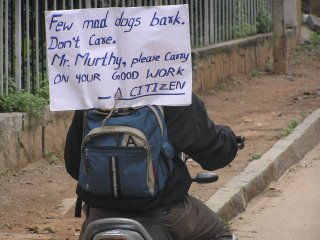 Deve Gowda, who has seldom been productive is adding oil to the fire with his comments on Narain Murthy. Deva Gowda is costing Bangalore a fortune from his unreasonable comments.

The fly-overs in Bangalore take forever to be completed. The congestion on the roads is unbelievable. A short spell of rains, and the power is cut for about 2 hrs. A mere 14 Km ride from takes 50 minutes. Public transportation is not great either. I hardly have any idea when will the law makers wake up. Metro Rails required endless debate before being passed. It is a necessity and not a luxury.

Bangalore is no longer what it used to 4 years back.

3 Replies to “The big IT dream of Bangalore……Over?”