Earlier this year seven of us had been to trekking to a waterfall near the town of Tada in Andra Pradesh. Quite easily, we had the best time of our lives that day. What began as enthusiastic bunch of students looking for a good way to kill a Sunday, ended on a high note with memories that would last forever. We started from our hostels at 4:30 AM by a taxi to CMBT and then to Tada by a bus bound to Nellore. Tada is about 75 KM from Chennai; roughly 2 hours journey. In the town of Tada, we hired a rickety auto for Rs 400 to drop us to the base and pick us back later in the evening.

Amidst all the anticipations from the trek, we saw a temple (under construction) with a quaint architecture. It belonged to Kalki Bhagwan. We couldn’t resist making out first stop to take some pics. Couple of snaps later, we got started again and headed towards the base of the hills. 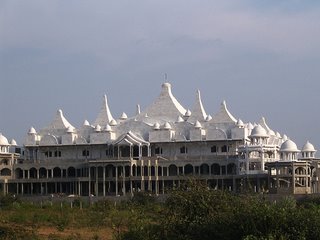 On our way, I happened to notice an auto carrying rural folk towards the town of Tada. It was a sight begging to be photographed, but I couldn’t take the camera out in time. On the back of the auto were four middle aged women dressed in Saree. Each one of them wore a Saree of a different colour. The bright red vermilion power on the forehead, the gleaming bangles, the shiny necklace, the sitting posture and the colour contrast in their dresses gave me a glimpse of a conservative India whose sight is not common in urban India. This aesthetically rich view is perhaps the expectation from any tourist coming to our country. Inside the auto, were men folk who were carrying, from what i can guess, agricultural implements, mud pots etc. A crude turban on their head, traditional dhotis accompanying plain shirts are again instances of finding orthodox scenic beauty. The place was set against vast fields and clear blue sky. The pleasing picture lasted only a glance as our autos went fast past each other.

We made our last stop before the base to appreciate the picturesque view of the hills we were about to conquer [:-p] . The view of hut below stands out, in my opinion, among all the photographs I took. The lone tree also made a good photograph. 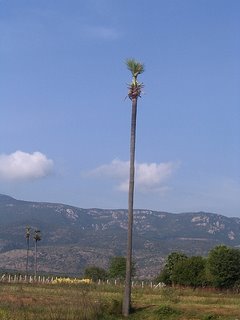 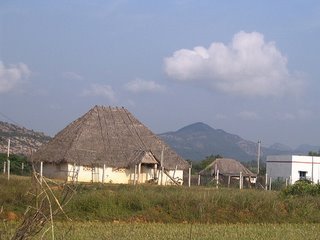 As we set out for our trek, the place was simmering under the hot sun, as were our expectations. We walked for quite some distance until we reached a stream which became our first resting point. The cool water of the stream so sweet to taste that out aquafina water was proved to be “no-match” to it. The water was very gentle, not turbulent, providing a wonderful ‘time-out’. Crossing the stream we reached a Shiva temple. The temple, covered with dry leaves, bared an antiquated look which stood against a sylvan background. We inquired with the priest if there is a ‘sangam‘ of two rivers for the Shiva Temple to exist, his answer was ‘no’. 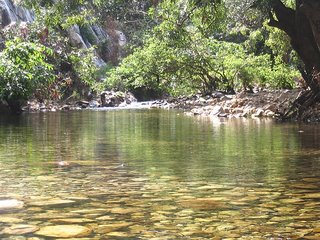 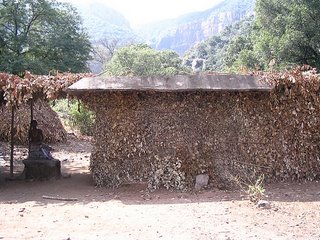 Marching through muddy trails left by hundred others who had been to the ‘summit’, we reached a stream studded with several hundred boulders of different sizes. Owing to the time of the year, the stream did not carry much water. From tiny pebbles to massive boulders, each one seemed unmoved for a long time. This was of course down-stream. 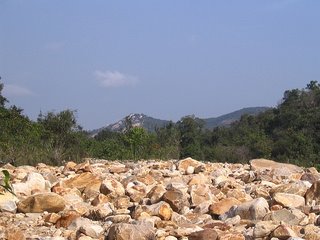 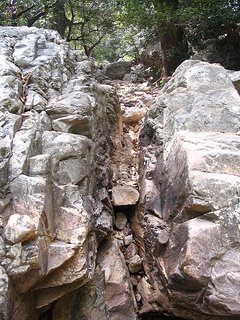 Climbing higher and higher, the terrain did become steeper, waters more turbulent and hurdles more difficult to cross. Eventually, we reached the top and arrived at the first falls. Thought not exactly breath taking, we were humbled by the sheer size of the boulder and the diversity that nature had to offer. 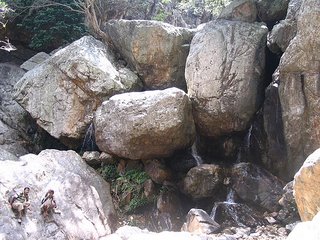 Climbing higher, we reached a small place where the water was prudent. We had lunch and then got to the site which was out intended ‘summit’. The giant wall like hills beside us forming a ‘v’ shaped valley and a narrow but deep body of water against us led to the second falls. A striking contrast to the temperature outside and the that of cold water was unexpected. The water inviting us to swim was hard to say ‘no’ to. If there is ever a reason to learn swimming, then it is to swim to falls and feel the water pounding on you back and chest. Camera couldn’t have been taken closer to the falls. 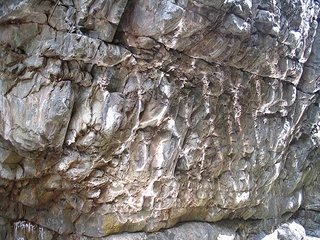 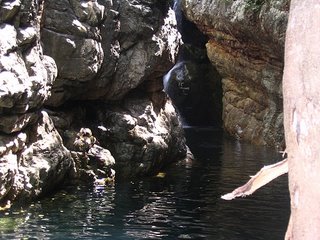 This was not the last. We decided to climb higher upon learning that there is a bigger falls up ahead. Assisted by some signs (man-made) and some creepers hitched to trees beside steps-like-arranged stones, we made it to the most absorbing scenery of all. 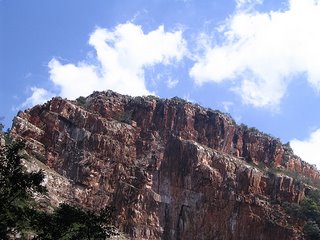 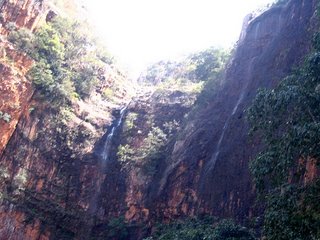 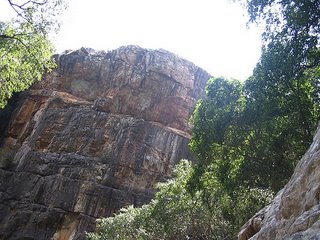 We then decided to head back to the base. On the way back, I got to capture these mesmerizing photographs of water showers from top of the hills. The calm waters made a slow and continuous sound draining itself into the river below. We were right under the cold natural showers. 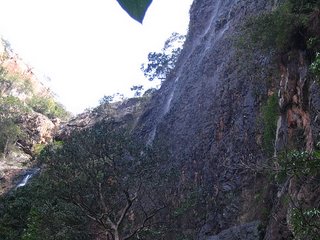 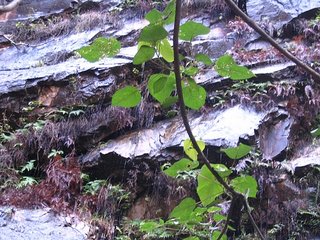 The way back was more arduous then we thought it would be. Tracing the way back proved more and more difficult with every step forward. The base camp did not seem that far the same day morning. Sweating profusely all through, we made it back after over 12 km of walking up and down. To make matters worse, we had stand in the bus from Tada to Chennai for over 90 minutes. It took us two days to recover from the trek.
Check this for more pics.
Trekkers: Bharath(Nama), Manohar(Muggu), Maruti (Maro), Ravi (Cavi), Ravish(Bulby), Shyam(Peter) and Yours Truly….
Also check this for a post on our trip to Hogenakkal

9 Replies to “Trek to Tada”