This has been one of my most difficult posts to write because of the gore image the photographs portray. I have been eager to write this post for a quite a long time. A couple of hours of googling and wiki-ing was good enough to collect all the information I needed. Almost all the pictures here can easily convince you that a picture paints a thousand words. 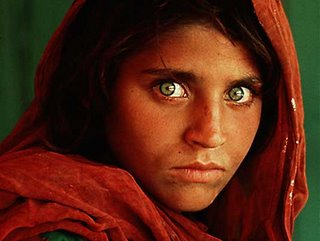 The photograph above, by Steve McCurry, can easily be recognised as it was much hyped by National Geographic Channel. The haunting green eyes of the girl haunted the whole world since the time it appeared on National Geographic Magazine cover in 1985. It is the first picture that come to our minds when talking about refugees. Torn apart by civil war, the plight of refugees was brought forward to the rest of the world through this very photograph. More info. here 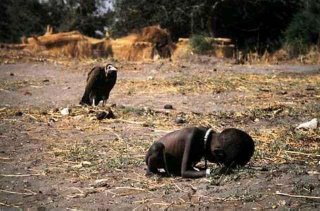 The Pulitzer prize winning photograph above was taken by South African photographer Kevin Carter. The shocking picture of a sever year old girl ‘resting’ for a while before going to the refugee shelter for food being stalked by a plump vulture brought attention to the gravity of Sudan’s famine in 1993-94. The photographer managed to shoo the vulture away, but no one knows what happened to this little girl. Burdened by the sight of so many sufferings in Africa, the photographer committed suicide 3 months after the photograph was shot. In his note, he says “I am depressed … without phone … money for rent … money for child support … money for debts … money!!! … I am haunted by the vivid memories of killings & corpses & anger & pain … of starving or wounded children, of trigger-happy madmen, often police, of killer executioners…I have gone to join Ken if I am that lucky.” More info. here 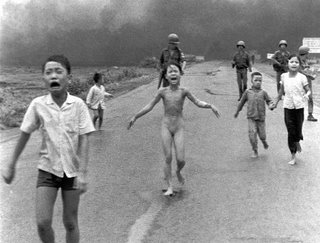 This pic. is in the forefront of all anti-war campaigns. This was June 1972 when a South Vietnamese plane “mistakenly” dropped its flaming napalm on South Vietnamese This girl was also found and she is fine with image being used to discourage war. Unfortunately no one’s listening. 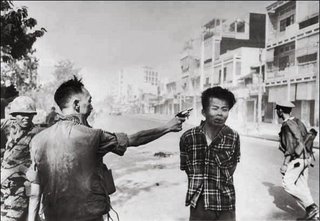 South Vietnamese National Police Chief Brig. Gen. Nguyen Ngoc Loan executes a Viet Cong officer with a shot to the head, one of the most chilling images of the Vietnam War. Photographer Eddie Adams, who won a Pulitzer Prize for this photograph, said the execution was justified, because the Viet Cong officer had killed eight South Vietnamese. The furor created by this 1968 image destroyed Loan’s life. He fled South Vietnam in 1975, the year the communists overran the country, and moved to Virginia, where he opened a restaurant. He died in 1998 at age 67. Loan ‘was a hero,’ Adams said when he died. ‘America should be crying. I just hate to see him go this way, without people knowing anything about him.’ (Source) 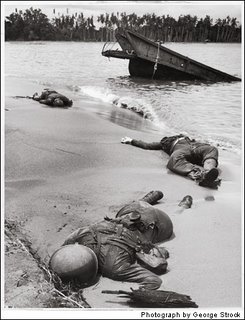 When LIFE ran this stark, haunting photograph of a beach in Papua New Guinea on September 20, 1943, the magazine felt compelled to ask in an adjacent full-page editorial, “Why print this picture, anyway, of three American boys dead upon an alien shore?” Among the reasons: “words are never enough . . . words do not exist to make us see, or know, or feel what it is like, what actually happens.” But there was more to it than that; LIFE was actually publishing in concert with government wishes. President Franklin D. Roosevelt was convinced that Americans had grown too complacent about the war, so he lifted the ban on images depicting U.S. casualties. Strock’s picture and others that followed in LIFE and elsewhere had the desired effect. The public, shocked by combat’s grim realities, was instilled with yet greater resolve to win the war. (Source) 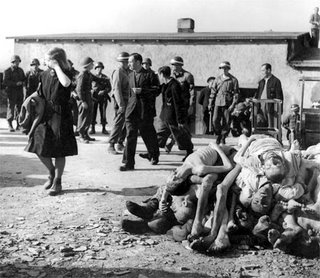 LIFE photographer Margaret Bourke-White was with Gen. George Patton’s troops when they liberated the Buchenwald concentration camp. Forty-three thousand people had been murdered there. Patton was so outraged he ordered his men to march German civilians through the camp so they could see with their own eyes what their nation had wrought. (Source) 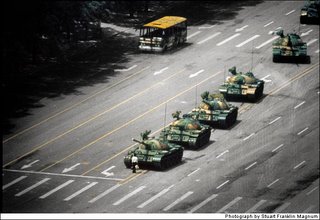 Finally a glimmer of hope. This is Tiananmen Square 1989. A hunger strike by 3,000 students in Beijing had grown to a protest of more than a million as the injustices of a nation cried for reform. For seven weeks the people and the People’s Republic, in the person of soldiers dispatched by a riven Communist Party, warily eyed each other as the world waited. When this young man simply would not move, standing with his meager bags before a line of tanks, a hero was born. A second hero emerged as the tank driver refused to crush the man, and instead drove his killing machine around him. Soon this dream would end, and blood would fill Tiananmen. But this picture had shown a billion Chinese that there is hope. That’s the power of ONE. (Source)

I really don’t know what effect Live8 concert had on African Debts. But I do know that the cries of Darfur is falling on deaf ears because of lack of oil in that region. UNO has declined to call it a genocide. Perhaps we dont know how many deaths will take till they know that too many people have died. I hope it will not take a disturbing photograph like above to divert the world’s attention to Darfur.

23 Replies to “Photographs that Shook the World”